Very happy to see the twin SCOTUS decisions. On healthcare, not because I wanted to see Obamacare survive (it would have been a glorious disaster for the Republicans if it had been struck down, and it wouldn't have hurt me personally) but because it was such the obvious logical result that any other outcome would have damaged the rule of law. As it is those three should be impeached for failing to respect precedent and basic legal theory.

On the other hand it's nice to know that the Catholic half of the court is apparently Irish, since they've followed Ireland's lead and made love and devotion legal for everyone.

Cheers and celebrations. Yay. Now let's end the war on drugs. Then raise taxes, raise the minimum wage, make voting mandatory, restore abortion rights, demilitarize and camera the police, get background checks for guns, and reduce carbon pollution. There ya go - the Progressive Agenda in a nutshell (do note that restricting freedom, creating dependency, or stealing all our golfs is not on the list. Sorry - maybe next election cycle). And, except for the last one, pretty much the Australian Agenda too. Though credit where credit is due; I've been telling everyone that the USA would get gay marriage before we did. Two more years for us.
Posted by MCPlanck at 8:03 PM No comments:

My good friend Nathan Ginn passed away this week. He had struggled with heart problems for many years, which can only be described as ironic because he was one of the most open, welcoming, and charitable people I've ever known.

He was a steadfast and true friend to me for over thirty years. Let me give you example of what I mean by friendship: as an atheist, I obviously could not get married in a church. Nathan got himself ordained over the internet (in the Church of the Whole Life, I believe) so that he could perform the marriage. But that's only the half of it; when that one didn't take, Nathan did it again. How many men will you marry you twice? If that's not friendship, I don't know what is. Sara and I got married in the Rose Garden in the park, by the power vested in Nathan Ginn by the State of Arizona, and the shattered pieces of my life were made whole again. By the power vested in Nathan Ginn. 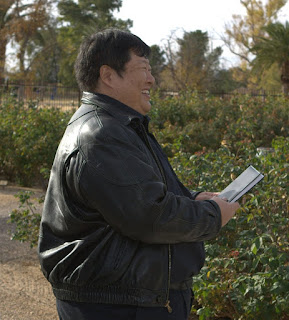 Nathan Ginn, playing his greatest role as "Priestly Officiant", in "The Wedding"

We met in karate class at the UofA and trained together for the next 20 years. We ran up and down the three flights of stairs of the UofA parking garage for what felt like 10 of them. He made movies, both as a producer and an actor. He made people happy. I still remember dinner at this mother's house as the only time I've ever actually enjoyed Chinese food.

Goodbye, Nathan. See on you on the other side of the veil.
Posted by MCPlanck at 10:46 AM 3 comments: