The most popular man in America

A polling firm polled several famous names to test their favorable/unfavorable ratings. Turns out the most popular man in America is Abraham Lincoln (at 91/2), which puts him well ahead of George Washington (86/3). Apparently old George (who owned slaves) didn't poll as well with African Americans as old Abe (who freed them).

But among Republicans, Santa got a 75 favorable rating (among Dems it was only 61). Think about that for a second. An old bearded, white man with magical powers who gives away free presents to "good" people is more popular with Republicans. I can't even think of any other parallels. Really, I can't...

Nor does this unearned largesse comport with Libertarianism. You would expect the Tea Party to throw Santa's presents in the trash: how else to teach kids that success is something you earn through your own merits, not an entitlement from distant and powerful forces? It's almost like they aren't really into the whole "do-it-yourself" thing, but more into "suck up to the rich and powerful." Go figure.

In other polling news, here's another reason I like being in Australia: Only 50% of Australians are religious. And half of them admit to not practicing it. It's almost like Scandinavia! Except for the snow.
Posted by MCPlanck at 10:01 AM No comments:

The dumbing of America

Another study has confirmed it: watching Fox news makes you dumber. People who watch Fox are less informed about world events than people who don't watch any news at all.

I really hate sounding so partisan, so let me point out nobody says this about The National Review or The Wall Street Journal. Those are partisan, right-wing hack jobs, but they're not actively making their readers dumber.

This isn't just a statistical study. I got an email today from someone who puts "Dr." in front of their name, and yet has not managed to get a single fact right in any of our correspondence. It is not that this person is naturally stupid; it is that the requirements of adhering to their chosen orthodoxy forces them to deny self-evident facts to the point that they lose their way.

In an important sense, the history of the human race is the story of people choosing make-believe over reality. Let us hope that is not its epitaph.
Posted by MCPlanck at 8:56 PM No comments:

You think a cat on the keyboard is a problem, try this: 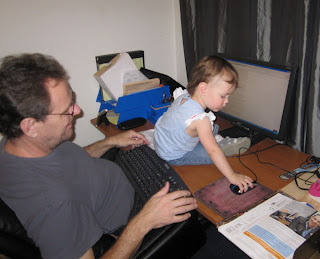 The gaffe heard round the world

Three Australians at work have asked me if I heard Perry's campaign-ending "Oops."

You gotta fumble pretty hard to have it heard on the other side of the planet.
Posted by MCPlanck at 8:12 PM No comments:

Batteries of the future

Here's an article on a new battery technology. It's as cheap as lead-acid, but completely non-toxic, made from common materials, and lasts at least 10 times longer. The chief application is giving power companies a way to store power produced at non-peak times, and then release that power during peak times.

Which means it's great for solar power. I have a vision of tanker trucks driving from the solar power plants of Arizona to New York City, where the ion-charged water is dumped into the power grid. Although I can't do the math to figure out if moving tons of weight would be more energy efficient than pumping it through high-voltage wires.

But then, why not just pump the ion-charged water? A cross-country pipeline that delivers power stored in water. I've read before that 100 square miles of Arizona desert would power the entire nation. All we need is a way to store and deliver the power. And, of course, the political will to give up the oil addiction. A carbon tax would be a good way to do that.

A ray of hope

Ireland closes its embassy to the Vatican

About time. Now if they can just see their way to throwing the bastards in jail.

Who knows? Once we start locking up priests, maybe banksters will lose their immunity!
Posted by MCPlanck at 2:36 PM 2 comments: