My in-laws made Thanksgiving dinner for me. It wasn't quite the same, as nothing is here. I went to the store to buy a pecan pie, and naturally I went straight to the isle marked "Frozen Pies." Which contained nothing but meat.

Eventually I found the "Frozen Desserts" section, but to no avail. Sara made an apple pie instead. Later, though, we got a pecan pie from a farmer's market, so the technology has crossed the border.

Over the weekend we cleaned out the garage. Our ship has come in, and we're not ready. We'll be staying with mum and dad until I get a job, which means our stuff will be staying with them too. Since they already have their own stuff, this is a bit of a problem. I tried to convince them to sell all their furniture and just use ours, but oddly, they weren't interested.
Posted by MCPlanck at 7:32 AM 2 comments:

This is what I found on my computer this morning. 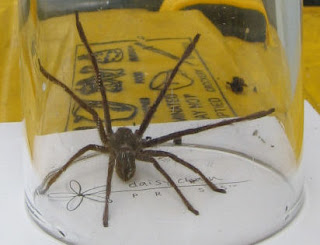 Had to call in the expert in-laws to deal with the monster. They swear it's not poisonous, just hideous. Apparently people often adopt spiders as house-pets, making a virtue of their constant presence (because repeatedly throwing them outside is too much work, and squashing them is too messy).
Posted by MCPlanck at 10:22 AM 2 comments:

The Baby had her first solid food (rice cereal) yesterday, and today she produced her first magnum opus:

It's surely as moving and coherent as anything I've done. Watching her bang away at the keyboard just like Mommy and Daddy is wonderful.

Now we just need to get her an agent.
Posted by MCPlanck at 10:03 AM 5 comments:

Email ThisBlogThis!Share to TwitterShare to FacebookShare to Pinterest
Labels: Baby

The power of babies

One of the most fascinating articles I have read in quite a while.

If morality is biologically based (which I think it is), then this is the correct way to approach it. And guess what? It works!
Posted by MCPlanck at 2:54 PM 2 comments:

Email ThisBlogThis!Share to TwitterShare to FacebookShare to Pinterest
Labels: Philosophy

The weather here is inane.

Last night, in the middle of the night, I was sweltering so bad I was ready to go out and buy an air conditioner, if only there were 24-hour air conditioner stores.

Today, at noon, I had to put a jacket on to go outside.

When I point out the absurdity of this, the locals just shrug and say, "It's Melbourne, where you get seven seasons in one day."
Posted by MCPlanck at 2:13 PM No comments:

The myth of private property

As long as we're discussing socialism, let's talk about this:

Separate an individual from society, and give him an island or a continent to possess, and he cannot acquire personal property. He cannot be rich. So inseparably are the means connected with the end, in all cases, that where the former do not exist the latter cannot be obtained. All accumulation, therefore, of personal property, beyond what a man's own hands produce, is derived to him by living in society; and he owes on every principle of justice, of gratitude, and of civilization, a part of that accumulation back again to society from whence the whole came.

Guess who said that?

And the answer is... oh, I'm not even going to say. You already know.

Another value of the socialist paradise

The Rich are different

Update: HuffPo has an update that puts a different spin on it. HuffPo Update (scroll down to the Update section.)

It's a fairly compelling argument by the prosecutor, but then, his job is to come up with compelling arguments. I'm still not sure, except to say if felonies are less record-damaging than misdemeanors, then that seems a problem in and of itself.

Maybe the real point is that he was offered a deal where the felony would be cleared after a few more years of (not getting caught) breaking the law. How many poor people are offered auto-clearing felonies?
Posted by MCPlanck at 11:05 AM No comments:

I cashed a check off of my American account, and got less Australian dollars. Considering that two years ago I would have gotten 30% more AUS, this really hurts.

On the other hand, the Australian government is making random deposits to my bank account now. Yes, to, not from. Very strange, I agree.
Posted by MCPlanck at 6:57 PM 1 comment:

Reacting to the election

I'm pulling all the cash I can out of America. The exchange rate - already insanely at parity - can only get worse.

My prediction is that the Republicans will stay true to form. They talk a lot about fiscal restraint but they always spend money like there's no tomorrow. So the economy should actually get a little better as government spending goes up. However, I expect that to lead to higher interest rates and inflation.

On the other hand, I could be wrong. The Repubs could actually shut down the government and block any spending. This would lead to an even worse economy and the dreaded deflation. In that case holding cash (instead of assets) would be better - but since the US will be in so much trouble, the exchange rate will probably get worse despite the deflation.

I don't know; I can't predict the future (I can't even predict my future six months ahead, as should be obvious by now), but I think it's going to be a tough two years.
Posted by MCPlanck at 10:20 AM No comments: