The Day of the Doctor

Just saw it in 3D at the theater. Short analysis: Brilliant.

Two things really stood out for me. One, this is the first time I found any value-added from the 3D experience; there is a 3D painting in the movie, and getting to see it was in 3D before being told it was in 3D was dramatically moving.

The second was how John Rawl's original position is just tossed out there as a solution to a minor plot point. Of course the Dr. knows about Rawl's work; it's that the script writers knew about that impresses me.

I am always a sucker for any movie that can work a bit of serious philosophy seamlessly onto the screen. So my longer analysis of The Day of The Doctor is: Bloody brilliant.
Posted by MCPlanck at 1:01 PM No comments:

Sword of the Bright Lady

The amazing Lou Anderson over at Pyr has bought Sword of the Bright Lady, intent on inflicting it on an innocent and unsuspecting world sometime in October 2014.

I am very happy about this development, as you can imagine. SotBL was my first full-length novel, written in a feverish three months almost ten years ago. Since then it's undergone a lot of editing, almost all of which was fixing the the first half wherein I committed every sin expected of a beginning fantasy author. Now the first half is about a quarter of what it was, and the sinning has been reduced to a tolerable din.

Pyr is the SF&F arm of Prometheus, one of my favorite publishers. Lou Anders is a Hugo-award winning editor. This book could not have landed in better hands.


FICTION: FANTASY
Micheal Planck’s debut flintlock fantasy SWORD OF THE BRIGHT LADY, an unassuming forty-year old mechanical engineer becomes a pawn in a cosmic game when he stumbles into a world where he must pit wit and rudimentary firearms against magic and monsters to open a pathway home to his wife, to Lou Anders at Pyr, an imprint of Prometheus Books, in a nice deal, by Kristin Nelson at Nelson Literary Agency (World English).

And you thought this was a rhetorical question:

Vladeck: I disagree with that. If a tree falls in the forest, it makes a noise whether you're there to see it or not.


No, Rep. Rogers, it is not a new standard in the law. As any first year Philosophy or Law student could tell you. If you violate my rights, you have violated my rights, even if I don't know about it.

But the fact that this very basic question of epistemology has now been raised in a Congressional hearing is less important than the fact that the elected representative got it wrong.  This either demonstrates the radical epistemological underpinnings of the Reactionary Right... or their simple ignorance.

And by simple, I mean most people recognize that phrase as rhetorical. It's not an actual arguing point; it's just a place holder for a reminder that "objective reality" trumps political ideology. But Rep. Rogers is so unused to intelligent conversation that he doesn't understand that.
Posted by MCPlanck at 12:08 PM No comments:

I was having lunch at a burger joint on Halloween, and the staff was dressed up. It's not a big holiday here yet (we had about 7 trick or treaters all night) but it's growing.

I was the first person to recognize his costume, so he gave me a bag of Blue Crystal. I guess being an American has its perks after all. :D 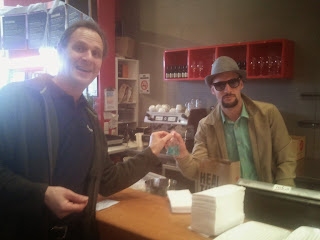