Here are the various blogs that were kind enough to interview me for the release of TKG:

To Read or Not to Read

Book Brats
Posted by MCPlanck at 11:10 PM No comments:


No, Hitler Did Not Ban Guns - And Neither Did Mussolini, Castro, Stalin or Pol Pot...

I would comment more, but really, the title says it all.
Posted by MCPlanck at 9:38 AM 3 comments:

Release of The Kassa Gambit!

One of the pleasures of publishing a book is seeing it on store shelves. When Sara's book came out, we went to all the bookstores in town and took pictures.

Unfortunately, I will never have that pleasure: the book isn't released in Australia, and by the time I get back to America it will be ancient history.

So if anyone feels like popping over to a book store and taking a picture of my book on the shelves, that would be great. Send it to me and I'll post it here.

Assuming, of course, that you can find a bookstore with it. Or find a bookstore, these days. I think I've seen three since I've been in Australia. Everybody here buys their books online, from America or England.

Spotted at a Barnes & Nobles! Thanks Angelica! 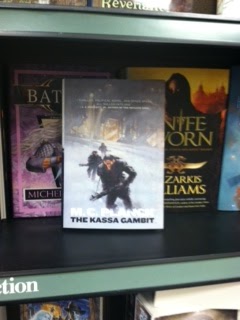 Saw the Hobbit yesterday. It was beautiful to look at, the acting was great (especially Martin Freeman and Andy Serkis), and visiting Middle Earth again was wonderful. All in all, I am glad I saw it.

That said, the movie was dreadful. Peter Jackson should be flogged. He tried to make the story as epic as LotR (going so far as to steal whole scenes - the ring falling onto Bilbo's finger, the storm in the mountains, the race across the narrow bridge underground, the hero cutting off the evil leader's hand), and it simply isn't. It's about some greedy dwarves that want to steal some gold.

Jackson tried to pump up the drama, but he can't; we already know all 13 dwarves have to survive, for instance, so every battle scene not played for laughs is just silly. You can't make an adventure into an epic without changing the story, and Jackson didn't do that, he merely added to the story.

And this is where the flogging comes in. Of the scenes Jackson added, two of them are so unforgivably bad Hollywood cliches as to make me question Jackson's sanity.

The least objectionable is Thorin giving his unnecessarily contentious speech only to reverse it by announcing how wrong he was and then hugging a hobbit. Not only is this unnecessary, but no. Thorin does not hug hobbits.

The worst was the absolute bog-standard cop show stupidity, "We have your friend! We'll kill him unless you throw down your weapons and let us kill all of you! Then we'll kill him anyway." Real life cops never fall for this; movie cops falling for it is unbelievable; making medieval warriors fall for it is absurd. Seriously, Jackson must have been high when he wrote that scene, and every single person on the entire set must have been oxygen-deprived or something to not have pointed out just how freaking idiotic it was.

And the lines given to Saruman (magic mushrooms?!!) are a freaking insult to the character and the actor. Wasting Christopher Lee's voice on those idiotic words is a crime against nature. Honestly, I almost walked out of the theater at point, out of a fear that this one scene would taint the majesty that is LotR.

I will undoubtedly see the remaining films, for the reasons mentioned in the first paragraph. However, I don't know if I'll ever see another Jackson film; it is clear now that he had one and only one story to tell, and that the majesty of LotR was due entirely to his slavish adherence to a creative vision that was not his own.
Posted by MCPlanck at 9:53 AM 4 comments: